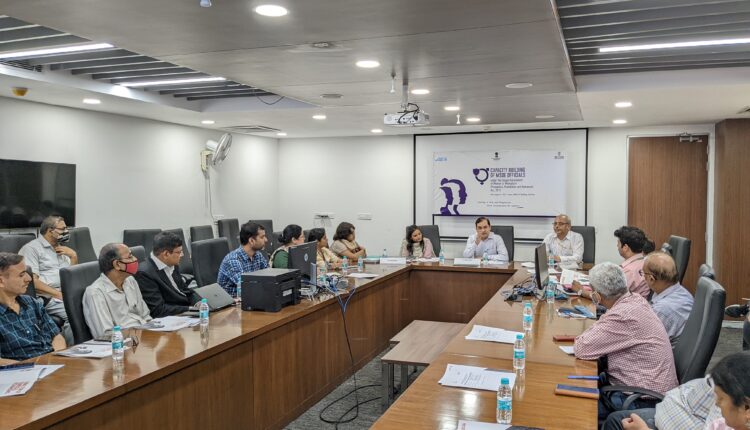 Aligned with the vision of Hon’ble Prime Minister, Shri Narendra Modi of empowering women for the rapid development of the 21st century India, the Ministry of Skill Development and Entrepreneurship (MSDE) inked a partnership with UN Women — a United Nations entity — to advance gender equality in skill development, employability, and entrepreneurship.

Under this programme, a series of training will be conducted for the capacity building of MSDE officials during a period of five weeks, starting from today. The training would not only provide a clear definition of what constitutes Sexual Harassment but also aim at increasing awareness on how the complaint process works. This initiative is a part of MSDE’s effort to take proactive measures to create a safe workplace for women and reflects its commitment to empowering women as economic agents and equal partners for the inclusive growth of the country.

Lauding the initiative, Shri Krishna Kumar Dwivedi, Joint Secretary, Ministry of Skill Development and Entrepreneurship said that though India has come a long was in empowering women and getting them their rights in the last 25 years, there is still a lot to be done to achieve true gender equality at the workplace. Today, as women are shattering age-old patriarchal doctrines and breaking through into jobs, there is an urgent need to make them financially strong so that they are not afraid to raise their voice against any kind of sexual harassment at the workplace.

Talking about the partnership, he also extended her gratitude to the UN Women for joining hands with the ministry to increase awareness among both men and women about what can and cannot be construed as sexual and harassment and how to accelerate such situations.

Speaking on the occasion, SmtSuhela khan, Country Programme Manager, UN Women said that UN women is delighted to organize the capacity-building training programme for MSDE officials on the Sexual Harassment of Women at Workplace (Prevention, Prohibition and Redressal) Act, 2013 (POSH Act) as a part of its larger partnership with the ministry on mainstreaming gender in its policies and programmes. She also said that this initiative is of utmost importance not only because it reiterates the ministry’s commitment to gender equality and women’s empowerment through creating safe workspaces but also paves a way for similar future initiatives.

The Government of India enactedthe POSH Act with the aim to provide a safe and secure work environment for women. It defines sexual harassment, lays down the procedures for a complaint and inquiry, and the action to be taken. It broadened theVishaka guidelines, which were already in place.

Felicitated to 7 young girl who have returned from abroad