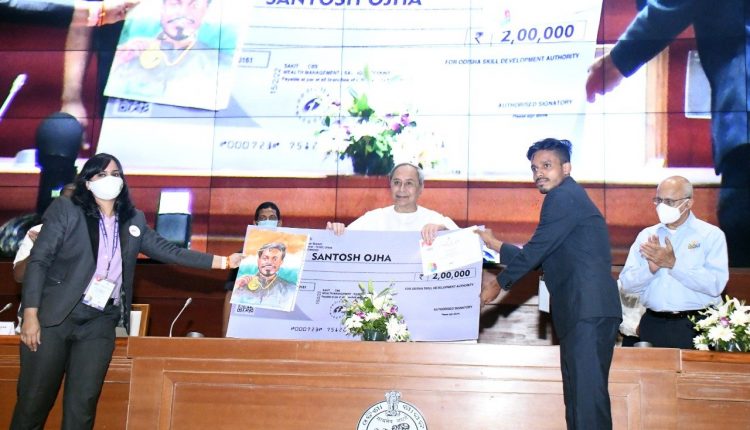 Bhubaneswar :“Winning is a habit; so is excellence. I believe, our children have now formed the habit to excel, to compete with the best in the world and win.” Chief Minister Shri Naveen Patnaik said this today while felicitating the winners of India Skills Competition. Odisha students have got as many as 59 medals at India Skills Competition 2021 which was held in New Delhi in January 2022.

Speaking at a function organised to honour the winners at Convention Centre, Lok Seva Bhawan, Chief Minister announced the enhancement of cash incentives for Biju Patnaik Dakhyata Award for the winners of world Skills Competition to held in Sanghai in China during October this year.

The CM said that Odisha will put the best resources available towards training the winners as they go through the gruelling preparations for the World Skills Competition in October 2022.

He also said that the institution which nurtures the gold medal winner will get Rs 5 crore for setting up the Biju Patnaik Centre of Excellence.

Setting the goal more challenging he set the target of 2-3-4 for the participants at WSC in Sanghai. He said, ‘We have kept the goal of 2-3-4, bringing 2 Golds, 3 Silvers and 4 Bronzes for the country from the youth of Odisha.’

Wishing the competitors at World Skills Competition, he said, “From now onwards, may all of you have ‘Shanghai on my mind, India in my heart’, as you work towards making this dream a reality.”

Congratulating the competitors the Chief Minister said that Odisha stood first in the India Skills competition held in January 2022 with 59 medals in total. He congratulated all the winners, their parents, their coaches, institutions and industry partners for this great achievement. He also thanked the National Skill Development Corporation for the support.

Sri patnaik further said that these medals come from traditional skills to the latest in technology proving the range and versatility of our boys and girls. In standing with our commitment to promoting girls in technical education, girls have brought the state national honours in areas that are traditionally male dominated.

The cm said that Odisha worked for a time when people would ask our boys, girls whether they are just skilled or skilled-in-Odisha. The endeavour got its first appreciation when Aswath Narayan from Odisha brought India its first ever gold in the field of water technology in the last edition of the World Skills Competition held in Kazan in 2018.

The CM said that we have made skilling aspirational for the youth and it is at the core of all that we do in the area of skilling. The World Skill Centre in Bhubaneswar, set up with ITEES Singapore as the knowledge partner, stands as a towering testament of our commitment towards the youth of Odisha, he added.

Speaking on the Chairman of Odisha Skills Development Authority Shri Subrato Bagchi said that the winners of India Skills come from the bottom most strata of society which reflects the aspirational outlook of the entire state. He said what the Chief Minister has done for Hockey, the same will be achieved in Skills too.

Santosh, G. Labanya and Naushin shared their experiences how they were driven to excel in skills. They appreciated the motivation of the Chief Minister who wants the children of Odisha to shine in every field.